Diagram, Money, British School. What is private school in Ukrainian

Diagram, Money, British School. What is private school in Ukrainian 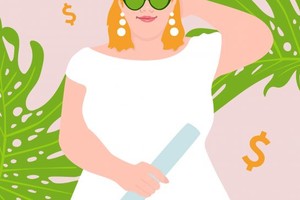 When we say “closed group“, we primarily mean the army and jail. At least – of the company / undertaking. And very rarely – school.

After all, the most striking and revealing model of informal relationships in the group is a school team. As obtained in this role in the future, most of them are projected onto the behavior in the same companies / enterprises, the army and prison.

Achievements in studies, sports, mirangula struggle within the intra-hierarchy is about public schools.

Social status and wealth of parents, the degree of bloat his students and parents, focusing on “elite“ everything from clothing to teachers, virtually absolute secrecy and ignoring the “outside world“ is about private schools.

The need for a detailed study of the essence of the institution of private schools in Ukraine is long overdue, as studies have shown, ideas about it is very different from reality.

Expectations: private school is a school where the professional instructors for a lot of money and give you maximum knowledge to the students.

Reality: private school – a place where students are given the usual “public“ knowledge, but their parents amuse their ego and put a tick next fad “to learn of the child in elite school“ and “high in front of friends with a cheque for tuition“.

This project aims to decompose the phenomenon of private secondary education in Ukraine on how the finer details – that, on the one hand, to try to run the ossified reform its mechanism; and on the other to draw the attention of relevant government authorities in doing this business.

Starting with the school, positioning themselves as the most elite – The British International School in Ukraine (hereinafter – British School).

To compare composizionibagni British School, which includes 4 training campus: 3 in Kyiv and 1 in the Dnieper river, will be a start of 2 of the defining aspects of its activities:

The factual material in the first case will serve as feedback about the school, its former and current employees, as well as parents and students who are tempted to the declared high level of knowledge and came to school just for the education, not the status.

The actual material in the second case will serve as the data of the state register and public sources.

British School and the learning process

This is the first thing you see, go to the British School .

However, the reality suggests about the statement of the owners of the school about the same level of education provided at the British School, and in private schools of the United Kingdom.

Parents say that the only advantage of studying in British School is a certificate, which gives you the opportunity to enroll in European universities. As for the other items – high-quality mastering them is possible only due to additional sessions with Tutors.

Significant in this case is an example of one family who, disillusioned with the British School and making sure that the promised education to British standards the child will not get decided to transfer it to the state ( sic!) school

“When translated son of the British in common, had many subjects to hire Tutors, and there were excellent“.

Another problem parents see the unsystematic approach of teachers to the presentation of the material and its incompatibility with the basic educational process that is manifested in the fact that “the testing at the end of each year ask the tests to which they children are not being prepared“.

That is, instead of providing knowledge, teachers only require. But how to get them, not difficult to guess – during tutoring.

And, of course, it is impossible not to pay attention to the problem of discrimination in British School .

According to the parents, the teachers of the school during lessons, allow yourself to answer the questions of the disciples with the words “you’re a girl“ – humiliating thus the desire of girls to acquire knowledge.

And yet, more important is the fact that they do not bear any responsibility as to the administration and to parents. That specifies how to acknowledge such behavior is acceptable by the institution’s management, and in absolute disregard of the “elite parents“ violation of the rights of their children during the learning process.

From the students the problems in the British School curriculum sound more eloquent . In General, they can be described in a phrase of one of the existing high school students:

“This school will not be forced to learn – the main thing to pay money“.

There we are talking about complete indifference as faculty and administration to the success of their students. In contrast to the external attributes – matching the elite status of the institution and the desire to attract within its walls, children “prestigious“ parents – this aspect is given a meager amount of attention.

Moreover – British School , it turns out, so do not worry for the education of their students to teach “British programme“ invites teachers from Canada, Ireland, North Africa, etc. it is Symbolic that parents who care about education only the school’s elite class, have nothing against it. 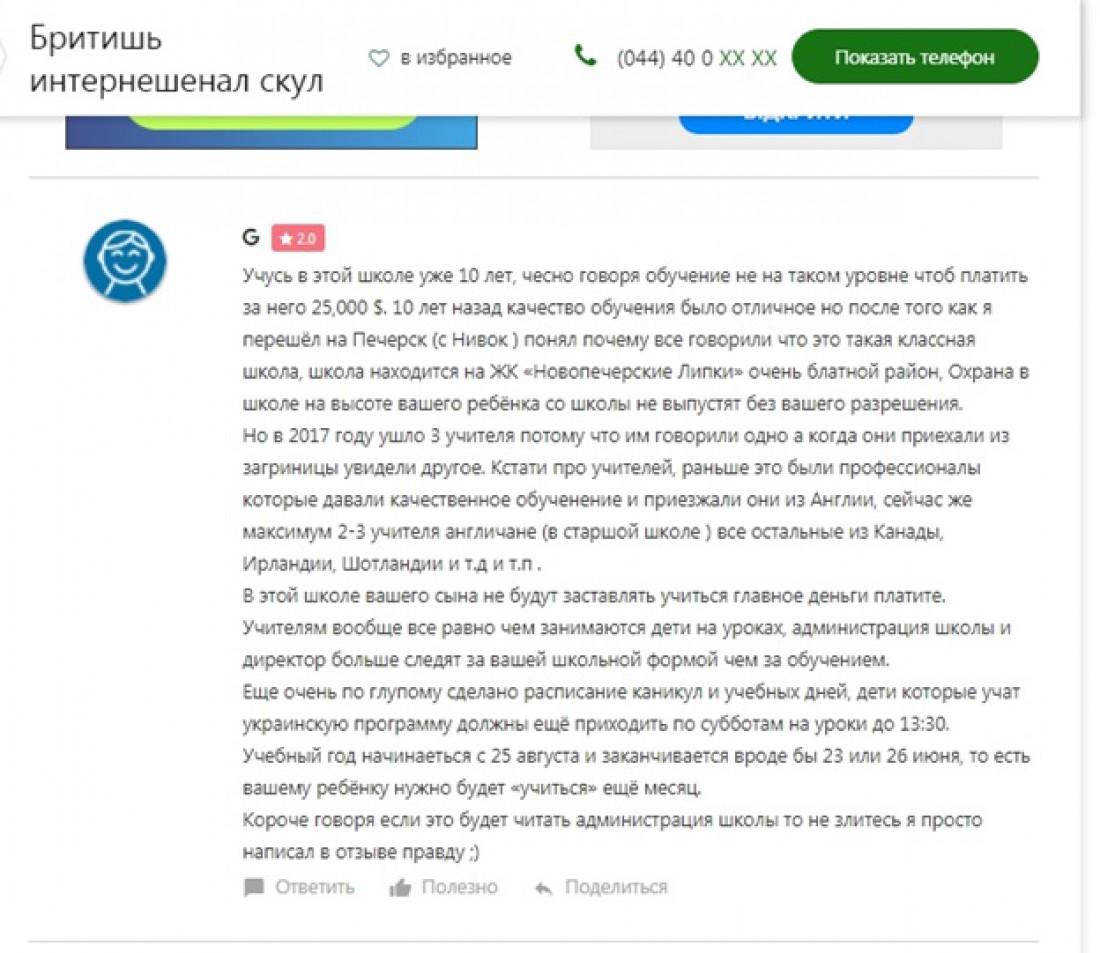 However, the low level of education provided to British School and tell her former teachers:

“30 percent of staff – more or less adequate people. A large part of the Ukrainian teachers zashugannyh and some teaching. About the “English“ teachers are silent – they are in school and a separate caste of untouchables, errors forgive them any, until the non-pedagogical education of children shouting and a complete lack of professionalism as teachers“. 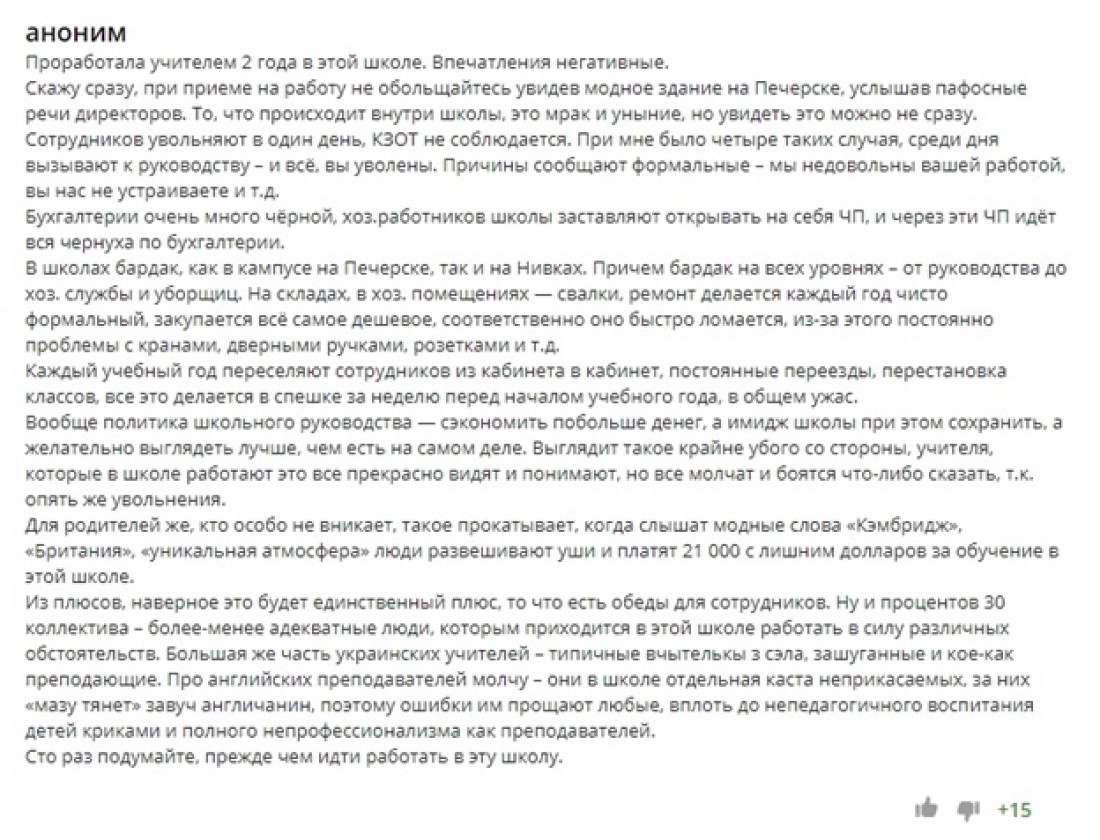 Confirmation that the faculty British School has a high pedagogical qualification, we find in the analysis of the profiles of teachers in social networks – most of them only recently finished the regular Ukrainian universities (like Rivne, DSU, FSL them. Dragomanov, etc.) and have relevant previous experience in school with this level of English language.

In summary, we conclude that the faculty of the British School aims to provide pupils with a high level of knowledge.

The reason for this is that on the one hand the teachers are not in danger of giving us low rating or make comments to children of wealthy and influential parents, and on the other in absolute lack of interest of foreign teachers end up, since they came to Ukraine for the sole purpose of earning.

Another reason for poor educational level, the proposed British School, seen in relation to it, as its administration, for which only the reputation of the school as an elite institution that allows you to keep a high standard of tuition; and the majority of parents for whom the only important is the certificate of an elite school. Which, in fact, is a common piece of paper-a pass to a prestigious University, and not a confirmation of knowledge of their children.

Separately it is worth noting that the main target of criticism of the quality of education is the Dnieper campus of the British School . That suggests the parents of the Dnieper school students are interested only in the external aspect of learning in it – the prestige of the institution – and an absolute indifference to the education of their children.

Training at the British School, without exaggeration, can be called very expensive:

For such money it is possible to study in prestigious European schools.

The cost of training included providing students with materials, food, form, organization of leisure in Kiev / Dnepr. In every grade from 5 to 10 students.

At the same time the income of the Dnieper campus of British School – 10 times less. At identical the cost of training. Probably here can be discussed how about misappropriation of funds of the school, its leadership, and tax evasion.

However, when the multi-million dollar income, schools show a rather low yield. For example, the profit of the Dnieper campus is from 170 to 300 thousand UAH. a year and Kiev schools – about 2 million UAH.

Little profit can be only in those cases when the expenses are almost equal to revenues. That is a common practice for Ukrainian business, but not for British educational institutions.

Not less remarkable is the fact that the Dnieper campus of the British School were also accused of Mozaika, OOO (which was counterparty of the school) in the fraudulent assignment of his property by the school management.

In turn, one of the former teachers of the Kiev campus of the British School said that “in accounting is very much black work – employment workers forced to open the FLP, and the FLP goes through these whole dill on accounting“.

In other words, the British School “banishes“ money through their employees, it allows management to understate official income and profit of the school. It seems that with the Mercantile purpose.

Because one of the founders of the school Ukrainka, Olga Zastavnaya, which no longer has other sources of income, 11 June 2018 purchased 2 private houses – 428,8 sq m and 397,9 sqm, in the elite district of Kiev – Pechersk. 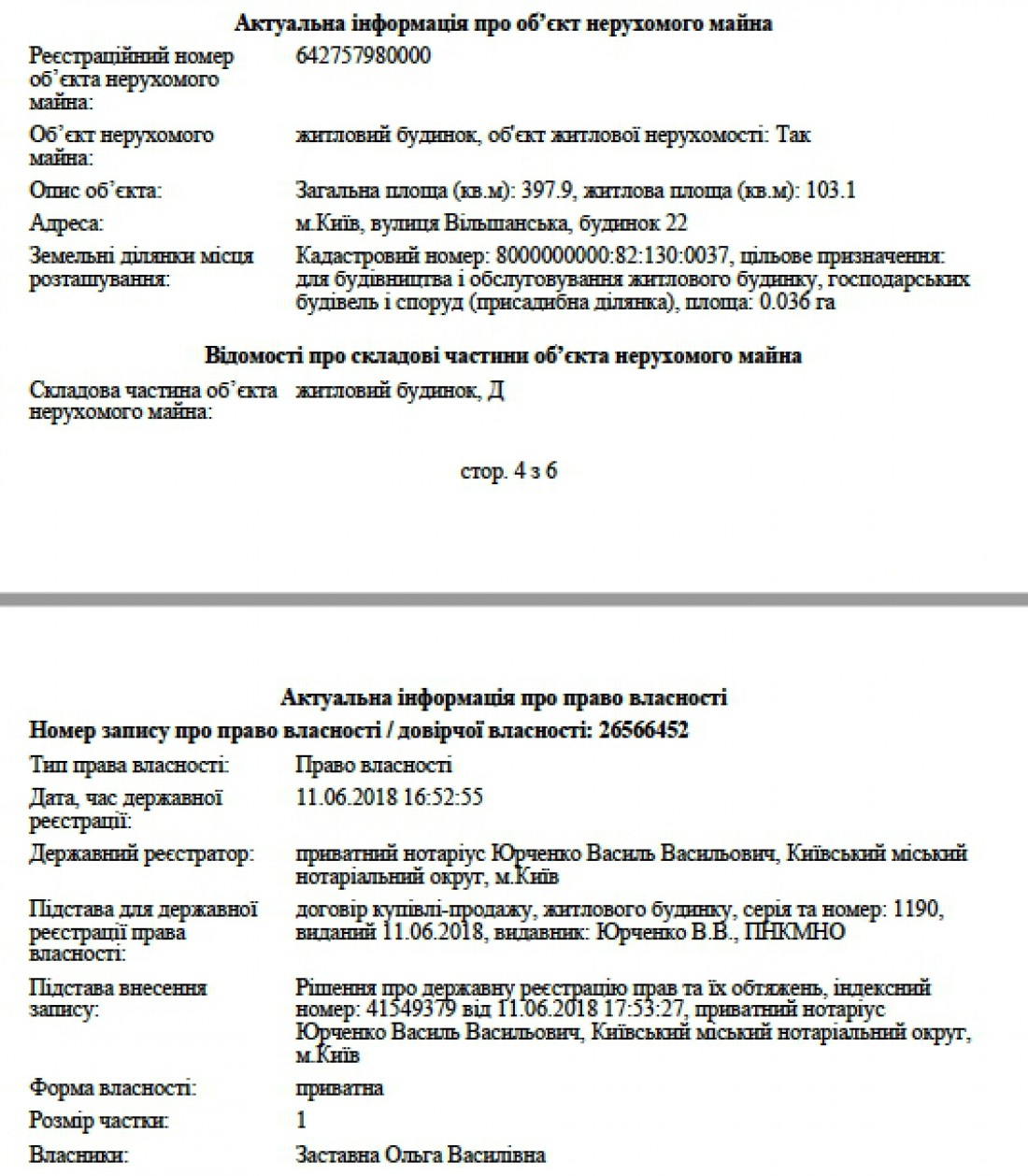 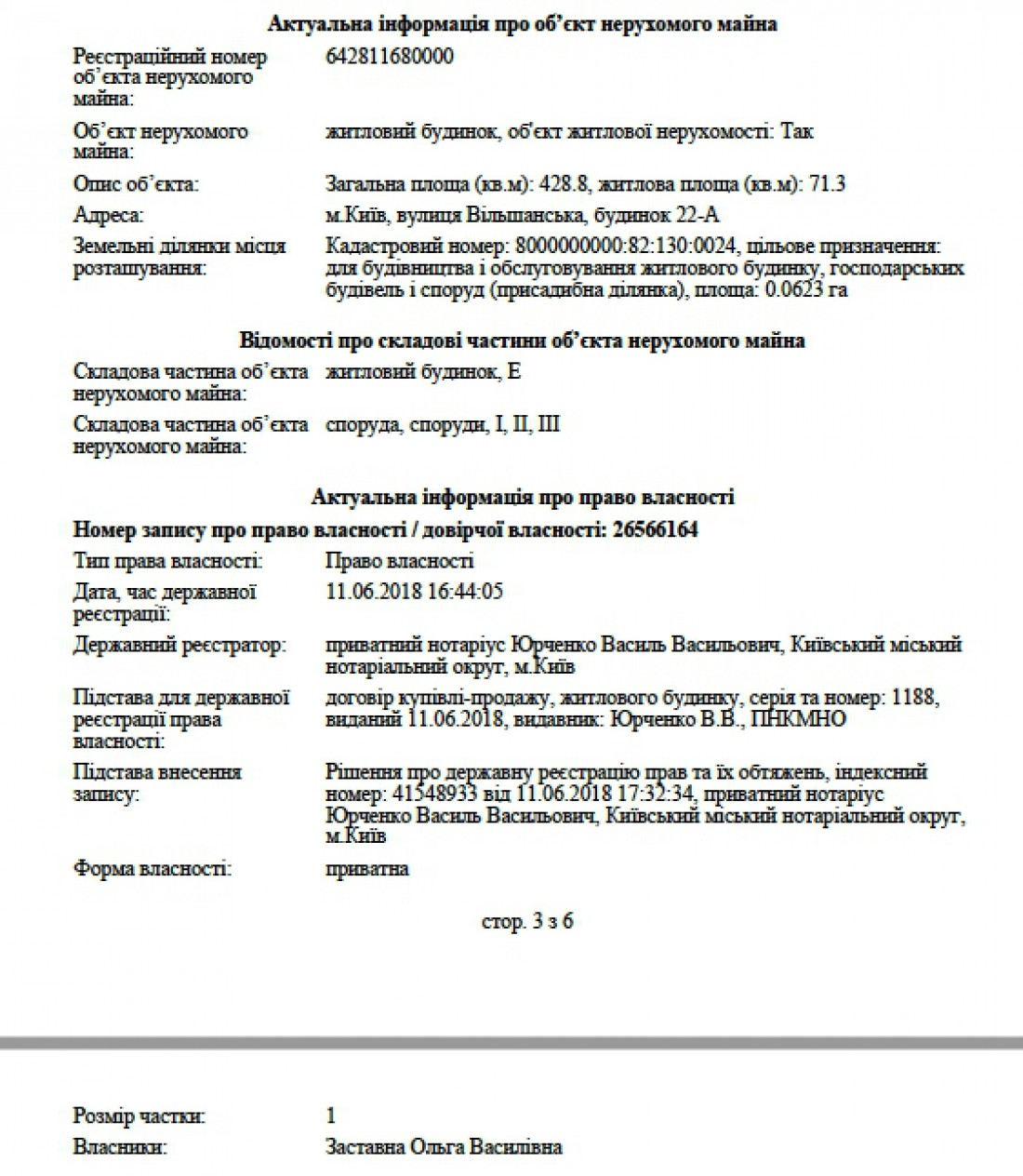 This is a sample budget of the city ananyiv – the whole of the district in Zhytomyr region.

British School and the United Kingdom

No less interesting was the ownership structure of the British School at which the school is “British international“ only on paper.

According to the British registries, persons are ABEL Anton Zastavniy (Ukrainian citizen and the son of Olga Zastavni) and Gethin Jones, who, according to his Linkedin profile , is engaged in the accounting and recruiting staff.

The latter is notable not only for being the only Brit in the company and which, there is every reason to believe, hired exclusively for registering a company in the UK, but the four-year experience in Moscow in 2009-2013.

Another sign of the “educational professionalism“ of ABEL , and therefore British School , is that the only employee of the company (except Zastavne and Jones) is Lomonovskogo Olga – professional model which has no relation to education.

However, the presence of companies with foreign registration among the founders of Ukrainian companies has long been a common thing – usually under European signs hiding the domestic way of doing business.

In LLC “the British international school – Kyiv“ in addition to Zastavne and ABEL , the co-founder is another British company – Fazio Limited. The only participant (!) which is still the same Anton Zastavniy – the son of the owner of a multimillion mansion in the center of Kiev by Olga Sostavnoi.

Thus, it is possible to state for the record: British School – a Ukrainian private school, the founders of which are the Ukrainians. And the whole “brianscott“ institution is that the accountant of one of its founders is a citizen of the United Kingdom.

Could the parents of pupils of school, having money and the means, to know that they are being deceived by stories about British education? Could. Why, then, didn’t you? Because for them, the British School is prestige and the opportunity to feel elite. And not the education itself.

Low level of the provided knowledge.

An example of a British School indicates a very bleak picture: the aim of private schools in Ukraine is the satisfaction of ego and ambition of the parents of the children for whom it is important not education, and belonging to an elite environment. And for that they are willing to pay a lot of money.

But private schools only skillfully use it. After the Foundation of the business: if there is demand, there will be supply.

Previously we described how to prepare for school with the help of educational games.